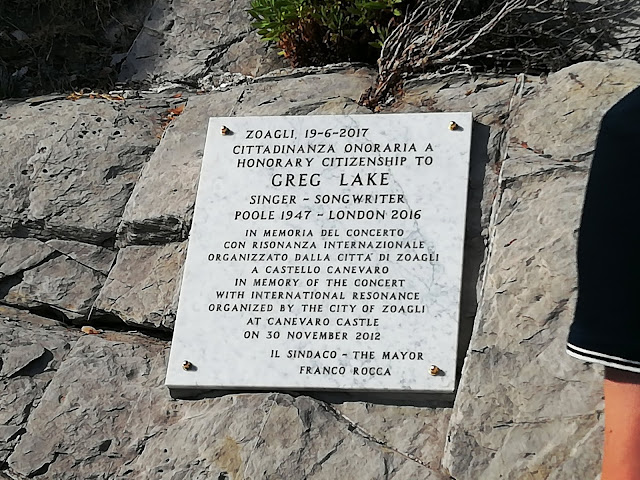 Even the "2nd Art in Progress Event", designed to celebrate the figure of Greg Lake, showed the extreme quality, as happened in previous editions.
The musical protagonists change, and we move from Bernardo Lanzetti (2017) to Juri Camisasca (2018), up to the current edition which is the subject of my comment.
What does not change is the engine of the initiative, Paola Tagliaferro, musician, multifaceted artist, president of the International Academy of Arts, which has provided testimony of its specific, organizational competence.
As is known, at the center of the event is the figure of Greg Lake, who loved these places and who gave those present a memorable concert "in the family" in November 2012, in the inner halls of the Canevaro Castle.
I'm talking about the enchanting Zoagli, a town in the province of Genoa that directly overlooks the sea, a sea that is almost always friendly, but sometimes capable of strong rebellions, such as the known one that dates back to the end of October 2018, when the the enormity of the waves created enormous damage and, remaining on the subject, swallowed the marble commemorative plaque made for the delivery of the Citizenship ad Honorem post mortem to the Greg Lake.

The June 27 event starts with the repetition of the rite, a new posting, this time with the content in two languages. 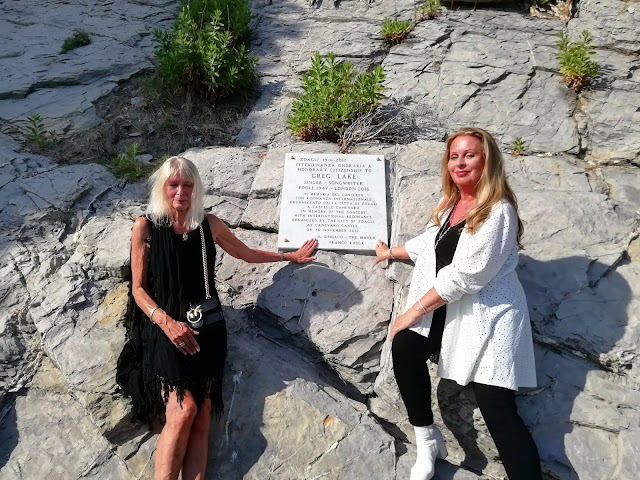 Since Greg's death at the end of 2016, the connection with Zoagli and Paola has continued through his wife Regina, always present, but in this circumstance the scent of ELP has been even more intense, due to the presence of a good representation of Emerson : his wife Elinor and son Aaron with the whole family, including the biggest nephew of Keith, Ethan, a thirteen year old who seems touched by the sacred fire of musical passion, piano in particular, and who played a central role during the event, having to propose a concert dedicated to the grandfather and the ELPs.
But let's go in order, emphasizing that, similarly to what happened in the past editions, the focus was art in the broadest sense of the term, and if it is true that quality music is a representation of it, the visual and literary aspects have allowed to stop the circle.
Brave Paola Tagliaferro ... what she proposes every year is ambitious and certainly aimed at a niche, which does not appear as the search for exclusive involvement, but rather the proposition of quality at all costs, with a more or less hidden goal, that of to intrigue and approach those who live within the orthodoxy imposed by others.


There is nothing easy in what I saw and heard on June 27th, but I enjoyed an unusual show, affected only by African temperatures, but not even Paola managed to change the weather.

After the revelation of the new plaque, the second step involved moving to Villa Vicini, for participating in the poetic reading "An idle afternoon of poetry, sounds and fragrances".

In a fantastic setting, introduced and interspersed with Giulia Ermirio's viola, Barbara Garassino started the acting, followed by Claudio Pozzani who, before proposing his idea of ​​poetry, acted as a mediator between the thought of the Venezuelan poet Jose Pulido is the large audience.
They were moments of pure emotion, authentically welcomed by the audience, which saw the presence of the ladies Lake and Emerson, certainly in difficulty with the language, but probably dropped in full in the magical atmosphere created.
I apologize to the protagonists of this part of the event, but some technical problems prevented me from shooting the videos.
Afterwards, the opportunity to visit the exhibition "The color of beauty", curated by Lydia Soltazzi Romanelli, to which the painters contributed: Maria Cristina Ardito, Madda Bottigelli, Rosanna Cordaz, Lia Foggetti, Rosy Maccaronio, Giovanna Orio, Mariarosa Razeto, Maria Vittoria Vallaro, and Lydia Soltazzi Romanelli.
At 9pm everything is ready for the Ethan Emerson piano concert, the start of the day's musical event which, contrary to what happened in the past, took place in the fascinating Piazza San Martino.
A large audience and part of the Emerson and Lake families in the front row. 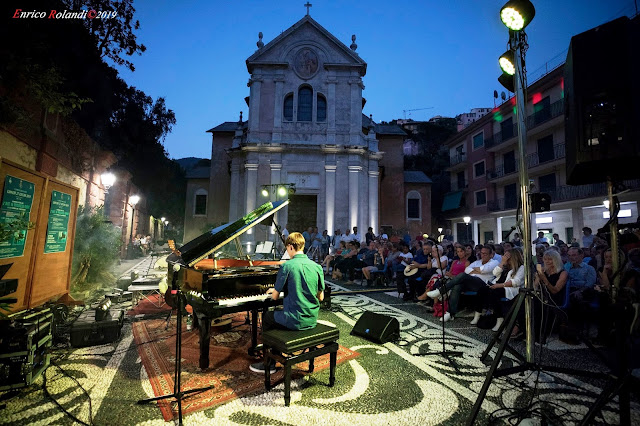 After some ritual questions to the timid Ethan (and we would miss the opposite!), the performance begins, with a special dedication to grandmother Elinor.

The video that I propose takes part of the concert, and highlights a maturity and a talent that makes the eyes shine to those who would like to see in Ethan the natural continuation of the grandfather; he is just a child, and who knows where his passion and life events can lead him, but dreaming is legitimate ... Ethan's dream, in this case, could be the same as someone who loved the music of ELP.

I leave the reader every kind of judgment ...

The end of the performance is in full ELP style, because Paola Tagliaferro enters the scene for a dream duet, the one linked to one of the most beautiful pieces ever in the history of music, Trilogy.

There is no time to metabolize emotions and Aaron Emerson is called to the stage for a greeting, and he is loudly asked for a song on the piano, which I have taken up close ...

The second part of the evening includes the staging of the live performance of "Fabulae", the latest album by Paola Tagliaferro and La Compagnia dell'Es which includes the guitarist Pier Gonella, Giulia Ermirio on viola, the pianist Andrea Zanzottera, to whom add Enten Hitti and the Indian percussionist Akhilesh Gundecha.

Paola Tagliaferro's music is the result of an advanced spirituality, and her proposition requires concentration and virtuosity: lyrics in Italian and English, acoustic and variegated instruments, staging of tradition and of different cultures that are integrated in the name of a language universal, that of music, and the alchemy created during the concert is a mix of all these factors, to which is added a particular atmosphere linked to the setting and the sharing of the moment with the "branches" of the rock elite, among which we try to find, almost desperately, a seed that can make the story repeat itself.

RAI 3 was present to sanction the sacredness of the event.
Some ritual thanks on behalf of the International Academy of Arts: in Regina Lake in primis, at the Limelightmusic Service of Corrado Barchi, at the photographers - Angelo Ciani, Enrico Rolandi, Cesare Rinaldi and Fabio Piumetti -, at the secretary of the Municipality of Zoagli Sara Coli, to the Municipality press office of Zoagli Isabella Puma, to Franco Rocca and lady for the preparation of green plants offered for Piazza San Martino; and again, to journalists Chiara Barbieri, Simone Rossellini, Gabriele Peritore, Andrea Trevaini, to the numerous Ligurian, national and international online newspapers.

Thanks also to those who have welcomed the guests in an excellent way: Canevaro Castle in Zoagli, Excelsior Palace Hotel Rapallo, B & B Villa il Respiro, Arenella Restaurant Zoagli, Il Delfino di Portofino, Ca’del Frate di Zoagli.
And thanks to Fiorenza Cianci and Athos Enrile who talked on stage with Ethan Emerson.

A special emphasis goes to the entire administration of the Municipality of Zoagli.
A personal note of mine
At the opening of the concert I was asked for a comment, which was followed by some questions to Ethan. The summary of my thought contains a whole life.
On June 15, 1972 - I was sixteen - I saw an ELP concert at the Palasport in Genoa, and those three on stage phenomena were unreachable, unapproachable and mythical musicians for a "baby" like me, already steeped in music.
Over time the distances have shortened, and I was able to interview both Emerson and Lake and see a concert of the latter up close.
Now I happened to learn about other family pieces, and this allows me to create other solid bonds with the music I grew up with and that still fills me with real joy... but who would have thought, forty-seven years ago, while I was sitting on the ground, on the hard concrete of the Palasport, that on a sultry day in late June of 2019 I would have dined at the table of the ladies Emerson and Lake? Small satisfactions that feed a enthusiasm typical of young people: music as a long and serene elixir of life? Paola Tagliaferro's music, in my opinion, helps and pushes in that direction.
And what will happen next year? 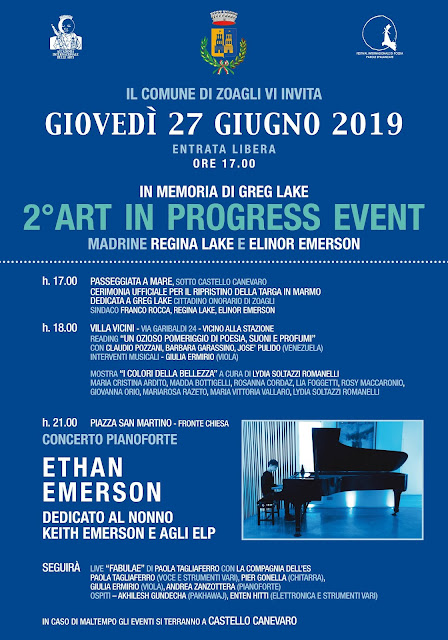 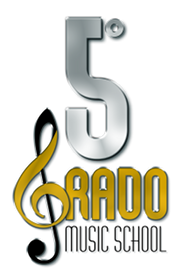