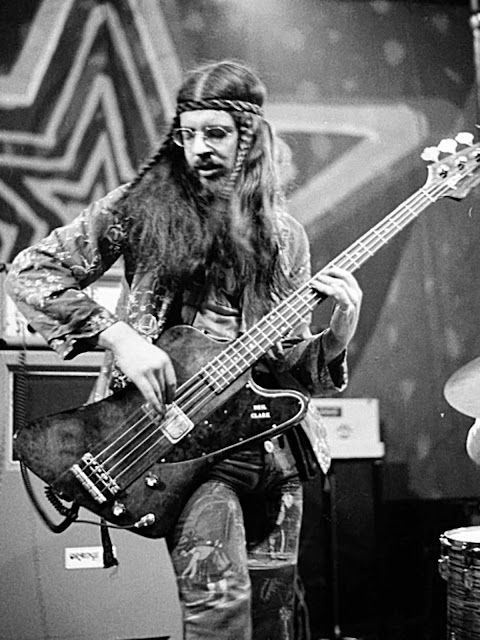 I don't think there are many interviews with Glenn Cornick. I made one in March 2007 and I think it's an interesting testimony...
I met Glenn Cornick in September 2006, at the Jethro Tull Convention in Novi Ligure.
His availability led me to write to him in the following months to establish contact.
His kind reply confirmed my first impressions and encouraged me to ask him a few questions.
He responded quickly and took the technical time to tell me his.
He did it in two episodes, but within a week he completed the work.
Here is the summary of our chat ... 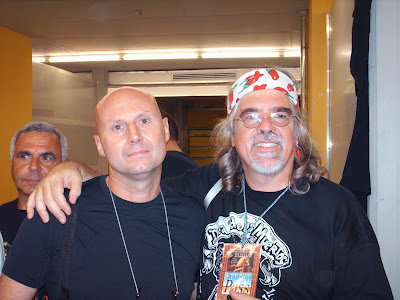 Glenn and Athos-Novi Ligure, 2006
Thank you Glenn for your availability. Let's start with some general questions.
For some time I have been devoting myself to reading about the great musicians born in the late 1960s, some of which are still in full swing.
It emerges that so many valuable musicians were born in the same period, maybe schoolmates. How do you explain this proliferation of musical talents, at the same time, all of them successful and all between the 1960s and the 1970s? What differences are there today compared to then?
Now everyone has a huge amount of material and lots of possibilities.
At the beginning we didn't know much and we had to reinvent ourselves every day in order to continue. That's why a lot of new ideas came out.
It is much more difficult now, since so much has been done in the last 40 years.
Moreover, in those days there was a great musical stage for those who wanted to develop new ideas, and all the musicians were friends and it was customary to encourage each other, drawing great inspiration from this.
The same readings provide another common element (perhaps the Tull were different in this), the dissolute life, full of excesses, without any care of one's physical and mental health. Do you think this type of self-destruction was a necessary step to achieve success?
Do you think the abuse of illegal substances has been judged by the artists needed to improve performance and creativity?
The Jethro Tull were always been very "clean". Almost no drugs and few parties.
If this had not been the case we could not have survived. When we were on tour in America we played in 30 different cities in 30 days.
We had to go back to the hotel around 11pm and get up in the morning at 6am for breakfast, and immediately at the airport for another flight to a new city.
As soon as we landed, we went to the place where we would perform in the evening, to make sure everything was in place and make the sound check.
After all this it took 3 or 4 hours to rest in the afternoon, in a hotel that we then left at 7pm, to return "to work". As you can guess, there was no time left for anything other than concerts and their preparation.
I can't speak for others, but I play better when I have full control of myself.
I like to drink 1 or 2 beers before going on stage, but no more than that.
I have seen many friends die due to alcohol and drug abuse, and it saddens me, but I have to think it was their choice.
And now something more personal.
Stories are told that Glenn Cornick's separation from the JT came about because of a kind of incompatibility of character between you and other members of the group who had a lifestyle totally different from yours, being more led to fun and rebellion.
What does this mean, if it is true: extreme rigidity of behavior on the part of the rest of the band, difficulty of cohabitation with Ian or desire to try to "walk alone"?
I was never told why I was fired from the band.
Of course, I really wanted to have fun, but that wasn't a problem for others, except for Ian. Clive and John are still two of my best friends and I really like Martin, although I don't have many opportunities to see him. It has been said that I was a fun person, but if I look at the evolution of the group over the years, I think of people who are addicted to alcohol, drugs and "women hunters" who have outdone me and gone well beyond my maximum limit. 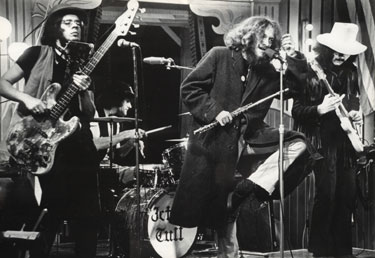 Jethro Tull
What were the best Jethro Tulls, in your opinion?
In my opinion the best time was that of my last months, when we realized "Benefit" and we played at Carnagie Hall and on the Isle of Wight.
My exit coincides with the closing of a cycle and the passage of J.T. from the rock and roll band to the group immersed in the big show businnes circus.
And which was the best bass player?
Excuse me, but for the music of J.T. no one was better than me.
Once someone asked me what Tull song I had played and I replied: "If you listen to a J.T. song, and hear the bass sing, then it's me who plays".
I saw you play at the Novi Convention with some of your former comrades, but also with John Weathers, a former Gentle Giant. How are these collaborations between musicians born? Is it just respect and esteem or does friendship play an important role?
Pugwash was the first drummer of Wild Turkey before moving on to Gentle Giant, so playing with him at the convention was a kind of reunion.
You know that now he suffers from multiple sclerosis and therefore he cannot take care of the whole battery and this is why he played percussion.
He has always been my favorite drummer. And then it's always fun to play with old friends. 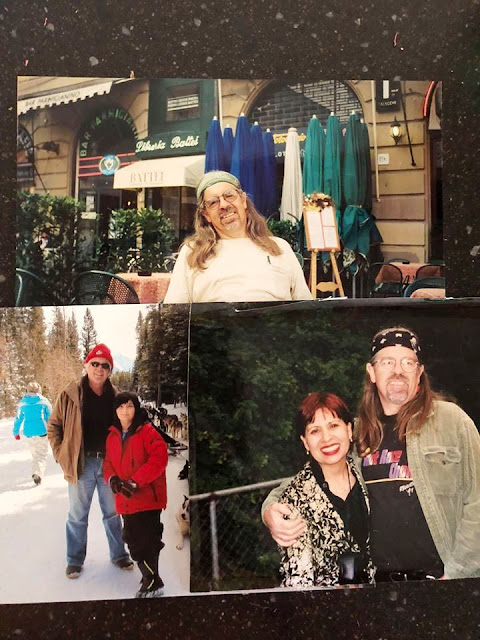 With Brigitte Martinez, his wife
Does friendship exist in the world of rock music?
Yes, although I don't think there are many opportunities at present, since there aren't many places, clubs or anything else where musicians can meet.
In 1969 in London, every musician was friends with every other musician, and everyone tried to see the performances of others, helping anyone in need.
He really was like a big family.
In the USA we had a special bond with the Mountain and we used to arrange our pieces together. One day we closed their show and the next day they closed ours. There was no competition between us.
For many years you've been out of the stars system. Why? Lack of motivation and disappointment or your priorities have changed and have you preferred to dedicate yourself to the family?
I never stopped playing but unfortunately I couldn't find any great projects to work on.
In the last 30 years I have traveled all over California, following different projects and having a lot of fun playing.
What did Wild Turkey represent for you and what do they represent right now?
Wild Turkey was really my chance to make the music I love and gave me the opportunity to play with great musicians.
In the new album I was able to write almost all the pieces and I also designed the cover and so it became a real personal project. 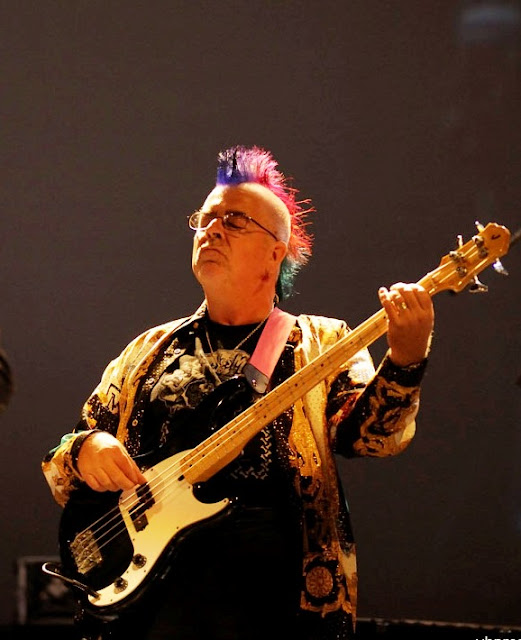 Glenn Cornick -Alessandria-2008
What is your relationship with Ian Anderson today?
We have never been close friends, although there has never been an unpleasant relationship between us.
I heard different definitions of "Progressive Music": what is yours?
In the '60s and' 70s the "progressive rock was not the main genre and therefore was not interpreted by all those who played, but today with this term we want to identify groups that played or play very complex songs, divided into different sections often complicated, in writing and execution.
I'm not a lover of Prog Rock and I don't think that among the things I wrote there is really prog music, according to traditional standards.
I prefer much more direct songs.
I think it is much more difficult to write short, simple songs, but good songs, and what I try to do is write pop songs that can last over time.
Do you think Jethro Tull can be considered a Rock Progressive band, or ... how would you define them?
I believe that none of the Tull pieces of "my times" can be defined progressive according to the current canons, and it was only with "Thick as a Brick" that J.T. they became a "prog rock band".
What are your future projects?
I hope I can continue playing with Wild Turkey. I wish I could record many albums and do a lot of tours. I feel like I can write like I've never done in my life and that the last album, "You and me in the Jungle", is the best thing I've ever done. 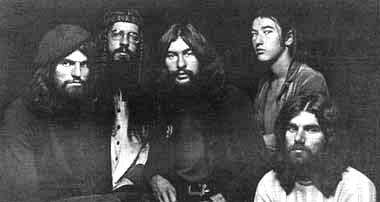 Wild Turkey
One last question, what is your concept of happiness applied to music?
Music and happiness? The most important thing is to be satisfied with the things you play with the right people, but honestly it's also good to be successful and even... make some money.
Becoming successful musicians gives you the opportunity to do many more things and invest in different projects.
I thank Glen Cornick, but I cannot give up his thoughts on John Pugwash Weathers, a feeling already expressed in another interview, but that he wanted to reiterate.
Pugwash is by far the best drummer I've ever played with and I wanted to involve him in this project although, obviously, he can't play the drums completely, due to the known problems. I had the idea of ​​using a percussion section in the middle of the song "You and Me in the Jungle", but I had no idea how to insert it, so I asked Pug if he wanted to contribute. He came to the studio and, with the help of Clive, made a great arrangement.
It was his idea to add the slide guitar, so he asked Mick to try something and what is heard on the record is the first test performed: the result was so good that no other recordings were needed.
Pugwash is a full member of the group and comes to play with us whenever his physical condition allows it. He has great talent and is a wonderful help for us all. 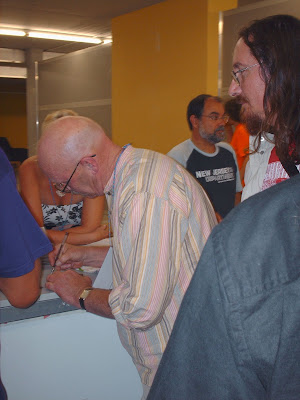 John Pugwash Weathers-Novi Ligure, 2006
During this interview a question related to the existence of friendship in the world of rock music and this last "image" dedicated to Pugwash seems to me to be really exhaustive.
Or is Glenn really different?
Pin It
Aggiungi commento
JComments